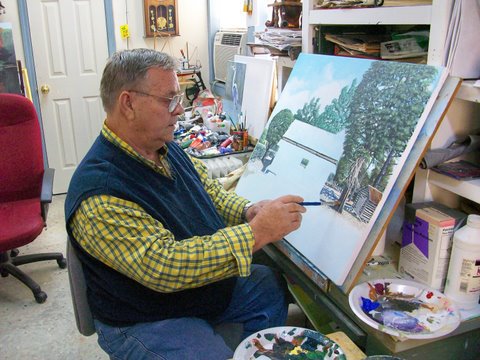 Billy Morgan never had an art lesson. He never went to high school. He can explain his gift of art only by saying, without any hesitation, it is a gift God gave him.

Billy was born on Christmas Day 1943 in Cobbtown, Georgia. He fondly recalled, "That was the year that Santa Claus like to have got killed." His father, Clyde Morgan, was serving our country as a foot soldier. His mother Florene was at home taking care of the family, which would eventually grow to include ten. "We were sharecroppers, working for five or six families," Billy remembered. "It was rough, pulling corn by hand and plowing a lot of mules. Until we got a tractor."

It was his life on the farm that led to Billy's primary subjects as a painter many decades later. Back then he sought out Bulldog brand soda and fertilizer sacks which had sheets of paper inside. "I was about five years old and sat out in a field and drewdifferent things around me," said Billy. Unfortunately, few if any, of Billy's early drawings still exist.

Billy's parents didn't encourage his artistic desires. In fact, they discouraged his drawing all together. "They told me it was a waste of time," Billy said. His parents wanted him to do his schoolwork and work on the farm, but Billy couldn't get drawing and painting out of his soul. "On the first day of school in eighth grade, my teacher got me Up in front of the class and told me, 'Boy, if you diddle around on paper like this, you'll have the IQ of an ant." Billy chuckled as he remembered that it took him a few days to realize that his teacher was throwing off on him, so he quit school, stayed at home, and worked on the farm.

Hard life outside the farm came quickly when Billy joined the Navy and served in Vietnam in 1964. Assigned to a transport ship, it was Billy's job to transport soldiers and Marines up the Saigon River and keep them supplied with food and ammunition.

After the war, Billy returned home and began working in a lawn chair factory in Waynesboro. That is where he met his wife, Patsy. "We worked in the same plant, and I began to follow her home like a puppy," Billy fondly remembered.

For two decades after the war, Billy had more than his share of misfortunes and turned to the bottle hoping to find inner peace. Just when it was about too late, Billy decided that he needed help, so he went to the VA Center in Dublin to get his life back together about twenty-five years ago. "People kept telling me I needed to go to AA meetings for help," Billy remembered. "I couldn't do it, so I turned to God!" Unable to describe the experience, Billy said, "A feeling came over me. He touched me!"

Someone told VA Director Dr. Bill Edgar that a patient wanted to paint on the facility's wall. Unsure at first, Edgar met with Billy and finally let him prove what he could do. One time Billy painted a man in an outhouse. When he decided that someone might be offended, he removed the man. Dr. Edgar asked Billy what happened to the man in the painting, and Billy responded, "The wind coming up from the back was chaffing him so much that he had to move!"

Later Billy was hired by the director to be the resident artist for the center. He worked in the halls painting signs, walls, and of course his own works of art. Former chaplain and Billy's role model, Rev. Jack Brown, remembered that patients began to stand around and watch in awe as Billy painted. His works of art became a sort of therapy to some patients. "There was one man who they were fixin' to send to Milledgeville - he was disturbed in his mind. As the man was sitting there waiting to take a physical, he snapped back into reality," Billy remembered. The man and his wife found Billy and hugged his neck. He told Billy, "I would be in Milledgeville if it was not for your paintings. When I looked at them, my mind went back to my childhood, and I came back to reality."

It was Jack Brown's encouragement that led Billy to tackle a new medium of art - stained glass windows. Although Billy is a self-taught carpenter and welder, he knew nothing of how to make stained glass windows. He set out for Macon to find some materials, and he prayed, "God, you have got to help me." Just as he was about to turn into his destination, Billy felt the need to go elsewhere. There he found an old man who took the time to show him how to stretch and cut the glass. "God showed me in my mind how do it. It was God's miracle that did it," The windows are still in the chapel today. You can find many examples of Billy's realistic rural scenes in the halls of the Carl Vinson Medical Center. There is also a mural of Laurens County's history in the Vinson Auditorium at the Laurens County Library.

Billy credits many people for his successes both as an artist and as a Christian. He fondly recalled Mrs. Louise T. Pope, a sweet little red-haired lady who mentored Billy andhelped him earn his GED certificate. As he reflected on his love of scriptures, he also credited Katherine Porter. "She bought me the Bible on cassette. I would lie in my bed at night listening to the tapes. I would fall asleep, but the subconscious mind remembers a lot."

"You have to plant a seed. If I can move one person, then I've done a miracle," Billy said. "If you believe in Him, He can do anything. I can't praise God enough."

While he was living in Montezuma, Billy began to teach his distinctive style to children and adults. Today he teaches art from a studio that he transformed from the front porch of his Lothair home in Treutlen County. If you are interested in taking art lessons, give Billy a call. He just may have room for you. And if you're lucky, Billy will teach you about God's wonders too.